The Tyranny of Trying

This week’s post is suspended between two stories. The first one is the old Greek myth of Sisyphus.

Sisyphus was a crafty and deceitful king who craved complete power. In his pursuit of power, he offended many men and gods and was eventually punished by being sent to the underworld and forced to roll a huge boulder up a steep hill. The boulder was enchanted, however, to roll back down the hill (over Sisyphus, in some versions) just before it reached the top. Thus, Sisyphus was doomed to repeat the same unending and futile task forever. 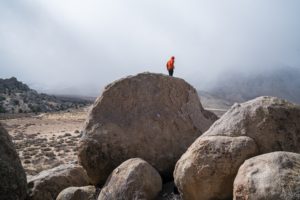 Photo by Tommy Lisbin on Unsplash

Sisyphus has captured the imagination of many writers, philosophers and artists, and there are several variations and interpretations of his story. If you’re interested, you can follow the link to to Wiki and read more.

Sisyphus is on my mind this week, not only because his story suggests to me the inevitability of rising and falling cycles, but also because his punishment was to forever try and fail.

His punishment was to forever try. 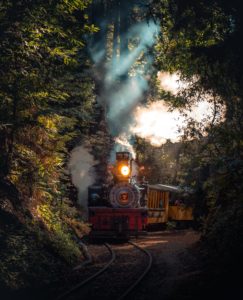 Photo by Casey Horner on Unsplash

I’m a product of a culture that taught me certain core truths about life. One has a responsibility to help others. Everyone has to do things they don’t want to do. One must never give up. One must try one’s best. We’re all in a train behind a little engine that puffs, “I think I can, I think I can, I think I can,” and that’s the right place to be, the admirable, ethical, moral, adult, acceptable, responsible, side-of-the-angels place to be. Good people try and try and try. They don’t despair, they don’t give up and they don’t say it’s too hard, I can’t or, most unforgiveable of all—I won’t.

No is not an option.

The truth is one of the things I least like about myself is that I can always be counted on to try my best. I don’t mean work hard. I mean try hard. Trying is certainly hard work. It’s sucked up most of my life in terms of time and energy. A lifetime of trying, though, has produced less of value to me, and I suspect to others, than an hour of work at writing, dancing, gardening, making love, playing with a child or even scrubbing the kitchen floor.

In the last ten days, I’ve privately and quietly despaired, lost sleep, felt inadequate, lost my center, lost my peace, felt gnawing anxiety and been deeply ashamed of who I am.

It’s not working. I can’t live like this. I’ve been pushing that rock up the hill as bravely as I can, but it just keeps rolling back down. I’m exhausted, bruised, battered, my fingernails are torn and I’m quickly losing any desire to be engaged with life.

However, oddly, one thing is working.

A couple of weeks ago, I went to a self-defense class at a local community center. The activities director happened to be there, and on an impulse I introduced myself and asked him if he’d be interested in working with me to start a community dance group. We fell into conversation, one thing led to another and as I write this, advertising is in process, flyers are getting printed, and somehow, I’m scheduled to start up a dance group in March, a thing I’ve long wanted to do in order the create the kind of healthy, inclusive community I’m starving for.

I didn’t try at all. It just kind of happened and I went along for the ride. I’ve spent hours and hours building dance playlists, but that wasn’t trying. I wanted to do it. I loved doing it. Music instead of current news? Lead me to it!

So what is it with this trying thing that’s driven so much of my life? I can’t remember a single time trying hard resulted in an outcome I wanted. It seems to me whatever happens, happens. Things always and inevitably turn out the way they turn out. I may have occasionally bought some time. I may have kept things glued together with my frantic trying longer than they would have otherwise, but was that a good thing, or in the end did I just make the cost higher for myself and everyone else?

All the really good things I can remember in my life just happened. I didn’t plot, plan, manipulate, force or otherwise try. I was just living my life.

And what about the punishment piece? Sisyphus, by all accounts, was not a nice man, and I don’t waste much pity on him, but what about me? Endless, futile trying certainly feels like a punishment. Why have I always accepted that? Why haven’t I been able to choose to stop?

The truth is that I try so hard because I feel like I have to make up for what a difficult, noncompliant, hypersensitive, disappointing, needy, dramatic, sensual person I am. I know I’ll never please or get it right, so all I have is knowing I tried as hard as I could. The world is filled with talented, creative, loving, generous, kind people. They don’t have to try to make the world a better place. The world is a better place because they live in it.

It’s not like I can just not try to make up for being broken!

If I don’t try, then what is there?

Which leads me to the second story, which I can’t find this morning, but I know is here somewhere in my library!

A student approached the master and said, “I work with disabled children and their families. Master, there’s so much difficulty for these people! I want so much to help, to make things better for them! What should I do? How can I best relieve their suffering?”

The master replied, “With no thought of help.” 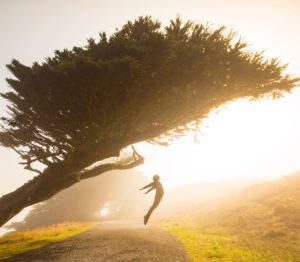 Photo by Stephen Leonardi on Unsplash