When I was pregnant with my first son in 1989, I approached parenthood the way I approach every new endeavor. I read whatever I could get my hands on. I had a shelf of books on pregnancy, labor and delivery, breastfeeding and parenting. Like most parents, I wanted to be the best I could possibly be.

It wasn’t until more than 25 years later that I came across the only book I needed, a simple paperback I’d never heard of or seen, a book never mentioned by health professionals, teachers or anyone else. The book was The Continuum Concept by Jean Liedloff. It only took me a couple of days to read, and I cried through the whole thing. I’ve rarely read a book that so completely captured my private longings and sense of being broken.

By then, of course, it was far too late to apply the information as a parent.

As I embark on the second half of my life, I think about the continuum concept every day. I grieve for us all, victims of rape culture, many of us broken and maimed sexually, physically, mentally and emotionally. Few of us have any idea what a healthy human relationship looks like, and fewer still know how to go about creating and participating in one, or are in fact able to because of the damage current parenting practices and other social norms cause.

My own needs for affectionate, nurturing touch and in-arms experience are chronically unmet and over the years I’ve learned to spend time in water, in the sun, with animals and in nature as substitutes for human contact.

The trees and forests here are nothing like the pine and aspen forests I knew growing up in Colorado. The broadleaf forests in Maine are tall and deep and thick, every layer incredibly rich, lush and complex. The trees are a mix of fruit, evergreen and hardwood such as birch, beech, oak, ash and maple, to name but a few.

Over the months, as I’ve walked this place and made friends with it, I notice a thing about this forest.

The trees die in one another’s arms. 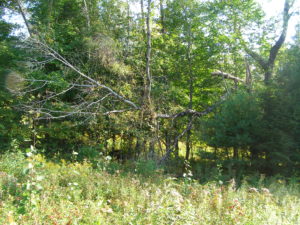 Trees of all ages grow here. Older, damaged or weak trees begin to lean and die. They can also remain standing in death, becoming snags for wildlife and insects, or rot from the inside out and the roots up with the help of fungi and moss. These can be pushed over with one hand, and as they fall they collapse wetly into pieces, releasing the woody smell of mushrooms. Smaller trees can sometimes find a way to fall all the way to the ground, especially at the edges of forested areas or along the river, but the huge old trees away from the edges have no room to fall entirely. They might drop branches or break at various points up the trunk, but the whole tree can’t come down at once. 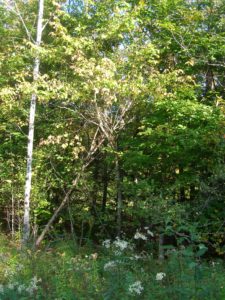 All over this 26 acres old trees are leaning, dying or dead, held in the arms of their healthy, living neighbors. Some neighbors of the same species are no doubt family members, but it doesn’t matter. A tall, strong ash might hold an old beech, or a maple support the skeleton of a pine.

This is not a dutiful, quick, can’t-wait-to-get-it-over-with embrace, but a years-long in-arms relationship while the dead tree rots and breaks down, feeding its patient supporter and the rest of the forest, until the moment comes when the last of its body decays enough to fully rest on the ground where it was born.

The forest grows together, lives together and dies together. 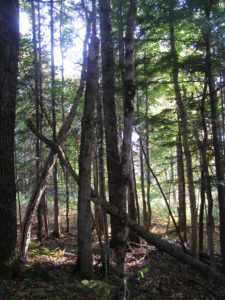 Yesterday morning I went out to clear around an old shed we plan to put a foundation under and use. At one time there was an arbor along the south side of the building that supported a grapevine. The arbor is long gone now, and the sprawling grapevine is as thick as my wrist in some places and has spread over an area of about 50 square feet. I went to work, lopping saplings and woody growth and pruning the rest. The vine had produced some purple grapes as it crawled up the shed wall. I’ve never tasted a grape with such intense flavor, but there weren’t many. I wondered if we built a temporary trellis and I gave it some attention we might be able to take cuttings and save it. If it can survive years of neglect and still fruit, it seems to me it’s happy here. 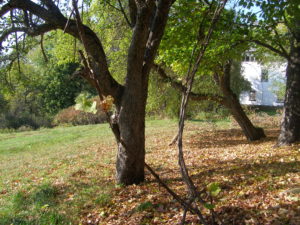 I worked away until I came to the foot of an old apple. This tree is gnarled and twisted, as they often are, and the entire trunk is hollow from below eye level to my highest reach with several entrances and exits. This particular apple is early, and the fruit has mostly dropped and been eaten by wildlife. As I knelt under the tree, cutting back woody undergrowth, I looked up.

The grapevine, having no trellis to climb on, had over the years climbed the tree instead, and pounds and pounds of purple grapes hung down from the apple tree canopy, invisible unless you stand right under the tree. 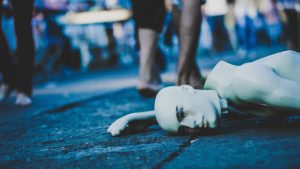 Photo by Edu Lauton on Unsplash

Trees are not people. Clearly, people are not trees. We have demonized the continuum concept. We have civilized ourselves into cities of concrete and steel, hospitals, institutions and prisons. Touch in our culture is about rape, violence, abuse, violation, capitalism and control. The need and desire to give and receive touch is viewed as inappropriate and dangerous. We’re addicts, homeless, outcast, broken, sick and lonely. We’re divided from one another, competitors and enemies. Few of us will die in anyone’s arms.

No, people are most certainly not trees.