I’ve never really thought much about vampires. I read Bram Stoker’s Dracula as a teenager, but I didn’t get into Anne Rice and I didn’t watch TV for nearly 20 years. When I came to Maine, my partner immediately set out to correct my cultural deprivation. He introduced me to Buffy the Vampire Slayer, which I fell in love with, which led to Angel. Then there was True Blood and Jace Everett’s sexy song, “I Want to do Bad Things With You,” along with a lot of other sultry Cajun music. 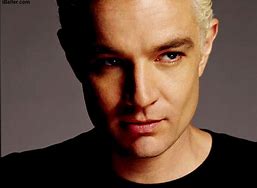 The aspect of vampires I was familiar with was the archetypal one. We’ve all run into people like this. They’re the ones we walk away from with a feeling of having been drained, no matter how brief, inconsequential or seemingly innocent the interaction was. Sometimes it’s hard to pin down exactly how they manage to suck all the energy out of any given person or situation, but they do. They’re insatiable and dangerous. I suppose they might be sexy, too, but not in the straightforward, I-wanna-do-bad-things-with-you-way where you both get to have fun. They’re all about the fuel, and others are just fuel-dispensing appliances.

These vampire series, characters, actors and writers added a lot of good creative manure to my already robust interest in all things magical, archetypal and mythological. Lately I had an idea for a writing project within the frame of plants and trees with thorns, and I wanted to revisit vampires within that context.

Well! Little did I know what a goldmine I would find.

I have a well-used reference library of witchcraft, folklore, myth, legend, symbology, magic and occult, not to mention the Internet. Any kind of magic intersects with herbs and plants, so I have a lot of reference books covering those subjects as well. I began to think about thorny plants I’m familiar with. The most obvious, as they grow all over our land here in Maine, are brambles. Bramble, it turns out, is a lovely old-fashioned word that can mean blackberries or raspberries. I began to research folklore surrounding brambles.

I happily juggled my laptop and handwritten notes. Books piled up on the floor around my chair. I lost track of time.

I discovered that brambles are a specific (meaning remedy) for vampires. Who knew? If you are bothered by a vampire, you need only cut some bramble canes and lay them in front of your windows and on your threshold. When the vampire arrives in the dark hours to drink from you, it will be unable to pass the bramble canes until it counts every thorn. This task should keep it well occupied until sunrise, at which point it will be forced to decamp.

I was enchanted by the vision of a sensual, dark, hollow-cheeked vampire, intent on seduction and blood, hunched over outside the window trying to count the thorns on a bramble by the light of the moon. (Do mature (ahem) vampires need reading glasses for close-up work?) Picture his slumbering victim, young, palpitating, curving flesh on tempting display as she sleeps naked amid the tumbled sheets. So delectable! The smell of her flesh! The sweet throbbing pulse at her neck — and other places! Alas! He must stop to count the thorns. The cruelty of life! Or maybe I should say the cruelty of undeath.

How is it I’d never known that vampires had this particular compulsive side to their character? Why does no one ever talk about these important things?

This was too juicy a lure to ignore, so I temporarily abandoned my research on thorns and collected a new pile of books to see what else I didn’t know about vampires. 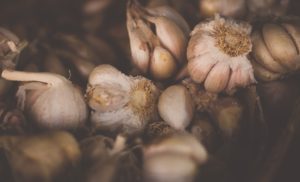 Interestingly, the Christian cross and so-called holy water were not traditionally used to repel vampires. (All due respect to Buffy and Angel.) The vampire is an ancient universal archetype recognized well before Christianity in cultures all over the world.

That being said, there are several plants that assist in vampire protection, one of them being the old stand-by, garlic. This can be used fresh or dried. Another protective plant is peppermint. Presumably, vampires dislike the smell. The Element Encyclopedia of 5000 Spells suggests wearing fresh peppermint leaves around one’s neck in bed, and adds parenthetically that peppermint is an aphrodisiac. Perhaps part of the efficacy of this old spell is that one will not be alone in the bed. 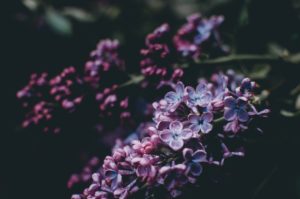 Both garlic and peppermint can be used fresh or dried, in combination or singly. If you know from whence the vampire rises, garlic scattered over its grave should keep it firmly underground where it can do no harm. Peppermint oil is also said to be efficacious, applied topically to the skin or pillow (of the intended victim, not the vampire). Surprisingly, lilac oil is also recommended. This is quite hard to find even today, and very expensive. (How was this discovered, and where? How was the oil procured?) The spell clearly specifies it must be essential oil from the lilac, not a chemical perfume. Interestingly, a remedy for psychic vampires, as opposed to the coarser blood drinkers, was infused rosemary taken as a tea or used to bathe in. 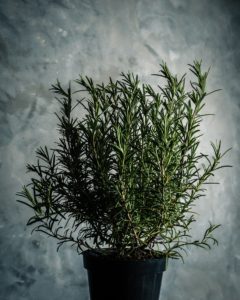 Iron is very commonly used as protection against many otherworldly folk, and vampires don’t like it, either. An iron ring set with pearls is said to protect the wearer from vampires. (Why this combination? Where did this belief come from?) Also, if one takes more than 100 iron nails and hammers them into the ground over the vampire’s grave, it will not be able to rise. Similarly, in what is clearly an old bit of women’s witchcraft, if one drives nine wooden spindles into the ground over the grave three days after burial, the vampire will not be able to rise.

I liked all that, but many of these protections are quite similar to other specifics for various spooks, haunts, ghosts and fairy folk. I’ve saved the good stuff for last. 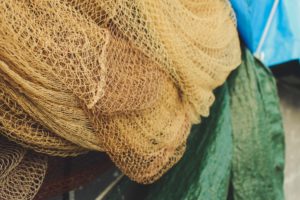 Photo by Manuel Sardo on Unsplash

It turns out that everyone used to know vampires are obsessive compulsive! If one doesn’t happen to have brambles, fishing nets can be used at windows and doorways. In this case, the vampire has to stop and count the knots. Or, if you prefer, sieves can be used, because they have to stop and count — you guessed it — the holes. This makes me think about our modern screens. Here was I, thinking it was all about keeping out the bugs. Nobody ever told me we were keeping out vampires as well. Alternatively, one can sprinkle millet in the graveyard where a vampire is buried, and it won’t be able to leave until it counts every millet seed.

This changes things. I wonder if this is the vampires’ dirty little secret. Maybe all the dark brooding looks, swirling cloaks, drama and theater is just distraction from what they don’t want anyone to find out — that they’re compelled to count. It definitely dulls my frisson of erotic fear. I wanna do bad things with you — as soon as I count this. What if the vampire’s prey has freckles? It almost makes me feel sorry for them. Keeping secrets is hard work. Think of the relief when people switched over to Christian crosses and holy water and forgot about brambles, nets, millet and sieves (and freckles).

My absolute favorite vampire remedy, though, has nothing to do with counting. It involves the oldest cleaning and purification tool: running water. For this one, it’s necessary to know exactly where the vampire is buried. One must procure the vampire’s left sock. (The left sock, not the right. Is this further evidence of compulsivity? Do vampires label their socks left and right? Does one ask politely for the left sock, steal it while they sleep, or wrestle the vampire for it?) Fill the sock with dirt from the vampire’s grave and stones from the cemetery in which it’s buried. (What if it’s a sock with holes in it? Do vampires darn their socks?) Throw the sock into water running away from the area to be protected. Now you have banished the vampire from that area.

Finally, for all you peacemakers out there, here’s fokloric advice from the Romani people of Macedonia. Vampires, it transpires, love milk. Romani legend says that if one makes regularly scheduled offerings of milk to a troublesome vampire, it will agree to leave a short list of people alone.

(This is beyond fascinating. What other traditions and folklore come from this group of people? Who were they? Do they still live tribally? Were their milking animals cows, sheep or goats? Do they have written or oral records? Why are they the only ones who figured out a peaceful coexistence practice regarding vampires? But no, that’s probably carrying it too far for this post. I can research that another time. Do they have protective spells against werewolves, I wonder? Hmmm …)

There you go. Now you know everything you need to know to protect yourselves from vampires. You’re welcome. I hope you’re half as delighted as I am by this esoteric lore.

Before I leave you this week, I do want to say that I am in no way minimizing or mocking the suffering of those who struggle with obsessive-compulsive disorder and like illnesses. I write this post in the spirit of playfulness and fun. Please accept it as such.

Hand me that bramble branch, will you? Where are my glasses? Let me see … one, two, three …

How long until sunrise?