The Politics of Food: Reluctant Journey

Last week I considered several questions about the politics of food. This week I want to share a reluctant personal journey.

Before going further, I want to clarify that I’m not a dietician, a nutritionist, a doctor, or qualified to give any kind of diet or medical advice, nor am I interested in doing so. I am, however, the number one expert on my life and my body.

Until the last three or four years, it never occurred to me to be baffled about why eating by all the latest advice and rules hasn’t helped me with chronic pain and some of the other issues I listed in the first post on this topic. My whole life was like that. I’ve always felt I played by all the rules and things didn’t work well in any arena. Eating well and not feeling well didn’t exactly stand out. I assumed it was because I’m broken and flawed.

On the other hand, I know from my years of medical transcription work that many people out there try desperately hard to adhere to their healthcare team’s recommendations in regard to diet, exercise and medication, but they still struggle with obesity, diabetes, heart disease, pain and mental illness, to name but a few. There are cheaters, of course, but most of those patients freely confess they’re noncompliant. Are all these compliant patients, and I assume hundreds of thousands of others like them, as broken and flawed as I am?

And what about the frequent headlines regarding young, fit, athletic, active people, including vegans and vegetarians, having heart attacks and/or dropping dead? This week it was the ‘Biggest Loser’ host and trainer, Bob Harper. According to all official guidelines, those folks should live to 100, right?

So, I ask again, what the hell is going on here?

I realize now I’m not broken and flawed, at least not more than anyone else. The problem has simply been my diet. It’s always been my diet. Eating the way we’re all supposed to eat has not, does not, and I’m convinced will not ever work for me.

Three years ago, I was introduced to the idea of a ketogenic diet. It’s gradually become more and more present in the popular press, but I’d never really heard about it. I didn’t think I had a problem with gluten, and my own homemade bread formed an enormous part of my daily intake, so low-carb eating had no appeal. The other half of ketogenic was even less appealing—eating meat and animal fat. I hated feeling worn out, used up and too skinny, but I didn’t want to be fat. Eating high fat is bad for you—everyone knows that. I’d never eaten a lot of meat and didn’t feel I had the money to start. I’ve never had a great appetite, though strangely, I was usually snacking, but meat wasn’t that appealing. When I wanted a snack, I wanted a thick slice of homemade toast with margarine and a cup of tea with honey.

I formed a relationship with a ketogenic eater, who I thought was frankly boring about diet. He was a converted vegetarian and believed his plant-based diet had given him a near-fatal heart attack. On the other hand, he was (is) smart and had done a lot of research, which I respected. Unwillingly, but curious in spite of myself, I began to look at some of the information he shared.

At the time, I was hypothyroid, on medication; suffered from constipation, insomnia, and my usual mild-to-moderate mix of anxiety and depression. All of that was a cake walk, though, compared to my problems with muscle spasm and back pain. 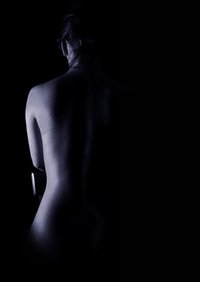 For most of my adult life I’ve had pain problems. At one time, I was diagnosed with fibromyalgia, but I refused treatment, which consisted of pharmacology. I had frequent spasm in my neck, shoulders, back and hips, at least every couple of months, lasting for several days. The spasm at times made it impossible for me to sit at my desk and work, drive, and sometimes even shower. Triggers would be things like putting my foot up on the edge of the tub to put lotion on my leg, or sneezing. I walked every day, danced when I was able, worked in my garden and generally was active, but if I did any kind of exercise routine or repetitive motion I was sure to get into trouble. I couldn’t do yoga without dire consequences.

It was truly miserable, and I’d tried every modality I could think of over the years. Nothing gave me more than short-term relief. I had no hope of ever solving the problem, or even understanding what the problem was.

I knew low-carb, high-fat couldn’t possibly be the answer, because it’s not the well-rounded, well-balanced, high-fiber healthy eating I knew we need to do to stay well. I didn’t want to give myself heart disease or cancer on top of everything else. On the other hand, my friend claimed to have cured his heart disease eating keto, and he had the blood work, strength and endurance to prove it.

My conclusion is that it’s difficult and time consuming to get reliable scientific data that’s unbiased about food. There’s “evidence” for just about every diet being The Right Way To Eat.

Then I started reading blogs and articles written by real people who are trying to get and stay healthy and understand what their bodies need. They’re not selling anything. They’re not trying to tell everyone else what to do. They’re living in their bodies, just like me.

During all these months of research and reading, a few things really stood out. Eating keto has a profound effect on diabetes, inflammation and a host of other maladies, and there’s plenty of science to back it up. I found whole communities of people healing themselves, learning together and exchanging information about what works in their bodies, many of whom have literally transformed their health with a zero-carb diet.

Keto diet is not mainstream. It doesn’t incorporate the food pyramid. Most doctors don’t recommend it.

Does that make it invalid or (even more ridiculously) morally or ethically wrong?

In the meantime, I moved to Maine and started living with my low-carb, high-fat eating guy. Gradually, I began to eat more like him. 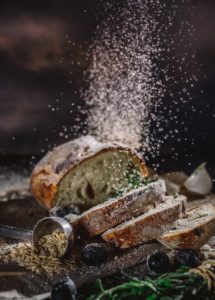 Photo by Helena Yankovska on Unsplash

I fought it every step of the way. I was like a bag of weasels when I gave up my morning (and midmorning and afternoon) tea with honey. What was tea without honey? I craved bread, homemade oatmeal, homemade scones and homemade gingersnap cookies. I was afraid to eat real butter. I decided this nonsense about vegetables and fruit was just that—nonsense, and I retained those in my diet, but I gave up bread and all grains. No flour. No rice. Goodbye amaranth, quinoa, cornmeal. No more homemade pancakes and waffles. No more buttered popcorn. I ask you, what is life without buttered popcorn?

I was feeling better. In fact, I noted I hadn’t had a back spasm since moving to Maine, an unheard-of period of time. I was also sleeping better. I had less bloating, water retention and gas.

I was disconcerted to find that I need to eat a lot. Much more than my male partner. It’s embarrassing. I discovered I had a lot of unconscious rules about Appropriate Eating For Women. I stopped worrying about keeping weight on and waited to get fat. I was eating more than I ever had before, and most of my calories were coming from animal fat.

I continued to feel better. I didn’t get fat. I’d read that fat doesn’t make you fat; carbs make you fat. I began to believe it. I felt healthy and strong and my weight was perfect. It stopped swinging up and down. I wasn’t cold all the time any more. I had more energy. My carb cravings stopped. I didn’t snack anymore. I got up, ate four or five eggs scrambled in butter on a bed of fresh spinach for breakfast, along with several strips of bacon and some fresh fruit, and then I started my day and didn’t even think about food until sometime in the afternoon, at which point I ate a ½ plus pound burger, mixed 70/30 with fat. Just the burger, mind you. Well, maybe a piece of cheese melted on top. When we were in funds, I ate a ¾ pound ribeye with lots of delicious fat.

Usually we are not in funds, however, and one day I ran out of spinach and fresh fruit at the same time. For a few days, there were only bacon and eggs for breakfast. Then we got a paycheck and I happily went and bought spinach and tangerines again.

Not spasm, but pain in all the old places—hip, low back and neck. I ached. I was stiff. I couldn’t sleep.

I was furious. I was scared. People HAVE to eat vegetables to stay healthy. They’re essential. I love fresh fruit. 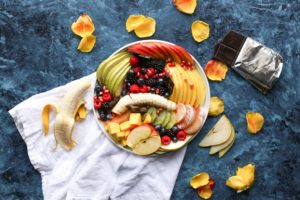 Photo by Brenda Godinez on Unsplash

I was not going to give up fresh fruit!

Eventually, I gave up both vegetables and fruit.

As of this writing, I no longer take vitamin or herbal supplements, with the exception of magnesium, one a day, and a melatonin at bedtime. I take no prescription meds. I drink lots of water and unsweetened tea, mostly herbal and green. I’m no longer hypothyroid, proven by blood test. I’m almost never cold. I still struggle with eating enough, but if I eat more than a pound of meat a day (not counting eggs and butter), I don’t get faint or hypoglycemic. My migraines are less frequent. My weight is dead steady. I have no trouble at all with my digestion. My BMI is perfect. As long as I eat enough, I have loads of energy. I stretch, dance, swim, walk, shovel snow and lift weights with no problems. I’m not short of breath. I sleep like a rock but rarely need to nap during the day.

I haven’t had a muscle spasm now for more than two years. I haven’t had a cold or a sinus infection. My nails are supple and strong. My hair is curly and wild and thick. My skin is great.

I’ve never felt so good, and I’ve never been so healthy.

This discussion of diet continues here and here. Please see my Bookshelves and Web Resources pages for links to diet and nutrition information.