In the used bookstore in which I volunteer, I found a slim paperback book of poetry, modestly and plainly bound, entitled A Gypsy’s History of the World, by Kim Robert Stafford. It called to me and I bought it for $4.00. 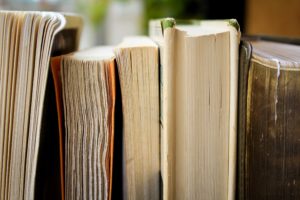 I had never heard of this poet, but he turns out to be quite well-known and has published several books, which I’ll be looking for now. In the meantime, this book is filled with treasures.

For a couple of days I’ve been groping for this week’s post. Sometimes they come so easily, these posts. Other times I flounder. It seems that the more I have going on, the harder it is to come up with a focused essay. Irritating, but writing can be like that.

When I listen to the sound of my life this week I hear a cacophony. There are the half-excited, half-apprehensive feelings I have as the night approaches on which I’ve scheduled a local venue to once again try to start a dance group. (Will I be a good leader? Will they like me? Will anyone come?) There’s the increasing pressure I feel to find a way to earn a paycheck. There are new friends and our conversations as we strengthen our connections. (Am I talking too much? Am I offensive? Am I too blunt? Do I ask too many questions?) I’m preoccupied with family dynamics, past, present, and future possibilities and fears. (What’s the right thing to do? What’s loving? What’s useful? What will people think about me? How do I take care of everyone’s needs and expectations? How much irreparable damage will I do if I make the wrong choice?) There are my weekly activities and appointments. All the material of my daily reading swirls in my head, awaiting synthesis and integration.

In my creative world, I’m with Pele, the Earth-Shaper, sensual, passionate and angry. This week others will come to dance with her, to make offerings, to propitiate and reconnect. Revolving around her are other characters: Rumpelstiltskin the dwarf; Poseidon, the Greek god of the sea; a little brown bat called Ash and his companion, a bark beetle; the eldest of the twelve dancing princesses, Ginger; an old woman, Heks, apprentice to Baba Yaga ; and Persephone, who comes to drum for the dance.

All this, and I can’t come up with a thing to post about.

I know this dynamic. The more pressure I put on myself, the harder I try, the more elusive inspiration will be. 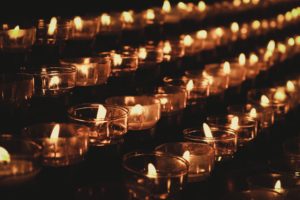 Photo by Pascal Müller on Unsplash

It’s a foggy morning here in Maine. Foggy and oppressive with high humidity and a threat of severe weather this afternoon. I’m planning on meeting a new friend for a walk and then I’ll swim. I decided to stop trying to write a post. I turned off all the lights up here in my little attic space and lit a candle. I picked up A Gypsy’s History of the World and turned back to the beginning of the book.

A dream flips me into the daylight.
I pry my way back:
a door opens, I enter, never
escape; the jailor sings by morning
duets through the bars with me.
I wake and out my window
by dawn a blackbird sings and
listens, sings and listens.

Listen. Thistledown jumps its dance
in the wind. I’m small and have
no regrets. Yesterday is a temporary
tombstone, a hollow stalk
on the hill. I’m putting my best
ear forward; in the space between songs
I’m travelling. My hands make
whistling wings in the wind.

No things meet without music:
wind and the chimney’s whine, hail’s click
with the pane, breath in a bird’s
throat, rain in my ear when I
sleep in the grass. I miss the
whisper of a swallow’s wings
meeting the thin air somewhere far.
Branches of my voice, come back.
Inside each song
I’m listening.

At once the cacophony in my head faded away, no more than the murmur of the trees and breeze or the ocean’s breath. For a few minutes, I thought about being small and having no regrets, let alone imagining future regrets. Yesterday and yesterday and yesterday, all temporary tombstones. All my yesterdays add up to almost 20,000 hollow stalks on a hill. And yes, activities and schedules, efforts and appointments, hopes and fears, words and information, friends and family, the way the shadowed ceiling looks in a sleepless hour and the path of silent tears on their way to my pillow. All of that. But I forget about the space between all those songs. I forget that I’m traveling through this place, this life, and these landmarks. 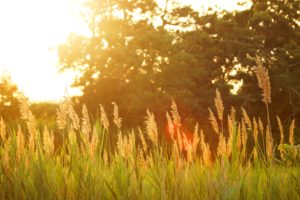 Photo by Dakota Roos on Unsplash

Sometimes I forget to just listen to life’s music, just witness, just be present and still. Sometimes I forget to fold my hands in my lap and watch the wavering shadows the candle makes inside the song of my life. The song will not be endless. One day it will be yesterday’s song, held in a hollow stalk on a hill. I can’t reach out my hand and clutch it, pin it down, record it and make sense of it. I don’t need to. I don’t want to. 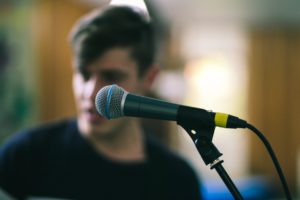 Photo by James Coleman on Unsplash

Saturday night I attended a monthly open mic event called The Coffeehouse. It took place in the basement of a local church, which is also where our Tai Chi group meets. People came from far and wide to participate. I was there to tell stories for the first time since I came to Maine.

My partner came with me, and I knew two other people there from Tai Chi. Otherwise, everyone was a stranger. I sat quietly in a corner and watched the place gradually fill up. I could see that many of these folks were old friends. In fact, during the course of the evening I learned that The Coffeehouse has been happening for more than 20 years in that very basement, hosted by the same man since the beginning. I heard stories, both on mic and off, of cancer, divorces, moves, jobs, remarriage and grandchildren. 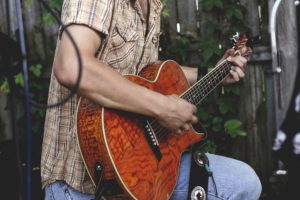 Photo by Brandon Wilson on Unsplash

One man stood up and read a short story he’d written. Another gave a hilarious rendition of a Shel Silverstein poem I used to read aloud myself as an elementary school librarian. Yet another read one of his own poems in between playing his guitar. A woman performed on her autoharp.

Many of the performers expressed nervousness, but each was volubly supported by the audience. Jokes were cracked, stories exchanged. Everyone was applauded warmly, including me.

When it was my turn, I stood before them, my heart throbbing uncomfortably in my chest, looking out at a roomful of faces I’d never seen before. I introduced myself briefly and told a short peace tale from China, followed by a longer story from Jane Yolen. The audience was generous, attentive. The memory of other, more familiar audiences in my old place was poignant and caught at my throat. As I wove the stories, I looked from face to face, speaking directly to each one as though we were alone. Their expressions softened as they entered into the stories with me, seeing what I was seeing and feeling what I was feeling. I know my own face wore exactly that expression as I listened to their music and songs.

Each performer took his or her fifteen minutes or so to share their art. It was a long night. In fact, it started about the same time I like to be heading for bed. Yet that evening fed something in me that’s been starving for three years. I had a strange sense of coming home, of belonging and kinship. 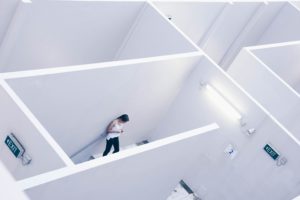 Photo by Andrew Loke on Unsplash

My partner and I talk a lot about community, how essential it is, how to create it, how to join it and how to support it. I believe, as humans, we must find some kind of community to meet our connection needs if we want to live well. We’re social animals, and I think we’re beginning to see the high cost of isolation and disconnection play out in suicide rates, violence and addiction.

The Coffeehouse clarified for me an aspect of community I haven’t really discerned before. Right now, the world is chaotic and increasingly complex. We’re faced with serious issues and changes that we’re ill-equipped to deal with. I’ve been thinking about the local food movement, grassroots politics, permaculture, and alternative energy and housing through the lens of community. All of those issues are vitally important, and becoming more so by the day, but I’ve been skipping over the most important thing that community can give us, the aspect that must be present, supported and nurtured before any kind of problem solving or effective organization can happen.

The Coffeehouse is, essentially, an adult playgroup. I heard nothing about diet, gun control,  immigration, politics or climate change. I heard nothing about social justice or gender politics. We all shared the same bathroom, the same coffee and snacks. We all put a voluntary donation in the basket. Instruments were shared. We shared time, microphones, personal stories and creativity. There was no talk of cultural appropriation.

We were kind and generous with each other.

As I sat there watching it unfold, it occurred to me to wonder how we’re ever going to manage to address all the pressing problems in the world today if we can’t come together as human beings and play with one another first. How do we find our way to collaboration and cooperation unless we build trust and respect and are able to just have fun together? The Coffeehouse showed me humans at their best. Heck, I was at my best. In such a warm and supportive atmosphere, my social anxiety was not disabling. People talked to me, welcomed me, expressed appreciation for the stories and received my appreciation for their contribution in return. I recognized that several who performed were more nervous than I was. None of us were hiding behind technological screens. There was no escaping a forgotten lyric, the wrong chord or symptoms of performance anxiety. One of the musicians talked ruefully about a new tremor in his hands that impeded his playing. We could all see it. He played anyway.

In the days since The Coffeehouse, I know I’ve found something I’ve been looking for since I came to Maine. I thought I just wanted a place to share stories again, and I do, but this gathering is about something much bigger than that. This is about mutual authenticity, creativity, contribution and play. It’s about friends. It’s about celebration and connection in the midst of a dark and stormy time.

I can hardly wait for the next one. 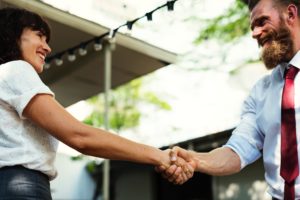 Photo by rawpixel.com on Unsplash