Selchie: A mystical creature who takes the form of a seal in the sea and a human on land.

I have a picture book from my childhood called Greyling, by Jane Yolen. It’s one of my favorite stories, by one of my favorite authors, and I’ve told it as an oral storyteller for many years. When I began doing storytelling, I sought out all the selchie stories I could find and incorporated them into my programs.

I rarely tell a selchie story without fighting back tears.

I’ve lately revisited this wonderful material for my second book, and it occurred to me to explore why these stories touch me so painfully and deeply.

Selchie stories appear in the Hebrides, Iceland, Orkney, Scotland, Ireland and the Faroe and Shetland Islands. Like all lasting oral traditions, they contain blueprints for navigating loneliness, exile, love, loss, competition, compassion, trust and power. A good story has many facets.

A common thread in selchie stories is that a seal comes to land, takes off its skin, and becomes human, usually a beautiful young woman. Subsequently, the skin is stolen by a man and the woman entrapped. In many of the tales, she marries  the man who has her skin (always a fisherman) and bears his children. Sometimes her husband promises that after a certain number of years he’ll allow her access to her skin again, but he doesn’t follow through for fear of losing her. Inevitably, the skin is found, often by a child, and returned to the selchie, who must then face a choice between her life with her family and her life in the sea. 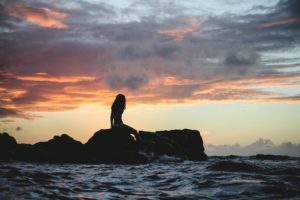 It is this choice that makes me weep. I know the agonized longing for what we are made of but can’t ever quite find.

As I observe the world and people around me, I think many of us feel in some way exiled from who we were born to be, from a place, from a tribal connection, from some integral expression of self. I believe this exile creates such an unbearable hunger we grasp at anything within our reach in order to appease it, becoming addicts, developing eating disorders and body dysmorphism, and struggling with anxiety and depression. We live in a culture of distraction and entertainment. We’re busy, noisy, exhausted, and inundated with information, stimulation, propaganda, manipulation and demands. 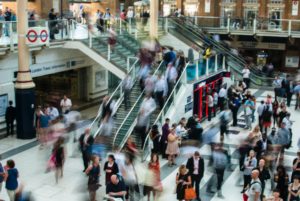 Photo by Anna Dziubinska on Unsplash

We want what we are made of, but how do we find what that is? Why is it taken away or withheld from us? Why are we so often forced to choose between one thing we’re made of and another? This all lies at the heart of selchie stories, for the selchie is a creature torn between two worlds and two tribes, and we instinctively recognize this conflict.

Choice is so often grief. If a selchie re-dons her skin and goes back to the sea, she cannot return, for she already knows the terrible cost of losing her skin, and though she may love her children and even have grown to love the fisherman she’s with, she cannot trust him. In returning to the sea, she is joyous, but now the grief of leaving her children and the life she made on the land replaces her longing for the sea.

I was with a man who avoided choice. He said he didn’t like to choose one thing in case something better came along. My experience of this was that he didn’t want to commit. It meant we couldn’t plan a date, a weekly ritual or even a walk. If we did, he frequently cancelled at the last minute. It was painful for me, and it frayed our connection considerably as I vacillated between hurt and anger. Eventually, I gave up and made my own plans. I told him that his maybe-I-will and maybe-I-won’t approach didn’t avoid a choice but was a choice. He refused to take responsibility for that, and he was bitter about the choices I made subsequent to his.

I’ve also been with partners who believe we can have it all. One man walked away from any situation in which he couldn’t have his cake and eat it too. It was a point of pride with him. He didn’t see why he shouldn’t have it all, and, as far as he was concerned, the world (and I) owed him that. Looking back, I see this as just another evasion of the heartbreak and consequences of having to make choices.

I think very few of us have the luxury of having it all. We come together and move apart, searching, seeking, fleeing and climbing ladders that we hope end in success. Many of us feel rootless in terms of place and tribe. We don’t really feel we belong anywhere on a map, and we have no rightful place in a human circle. We do the best we can, a choice at a time, and over the years those choices and their consequences teach us who we are and turn us into adults.

On one particular day of no special consequence, my small toddling self, clothed in a yellow bathing suit with white trim, was lifted into a pool of water as big as the sea. From that day to this I’ve loved the water, and during occasional long, dry spells without access to swimming I dream of water and wake myself weeping with the anguish of my longing.

I’m a creature of water. It’s part of what I’m made of. 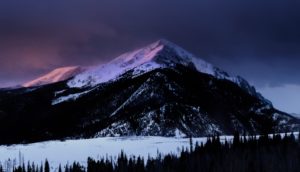 Photo by Nathan Anderson on Unsplash

For some years I lived in a city and laid awake at night watching headlights move across the ceiling and walls, straining to hear a precious moment of silence in between the sound of cars and sirens and too many restless people moving through the pale night. I dreamed of high, snow-covered mountains under starry skies and the peace of trees in unbroken darkness. Every day I died a little more, but I knew in my heart one day, one day I would leave the city and live in the shadow of the mountains I dreamed of. A thousand nights later I freed myself from the tentacles of that city, but I also left behind my marriage and the father of my children, my belief in happy-ever-after, the most lucrative job I ever had and the good wife and mother I wanted so much and tried so hard to be. 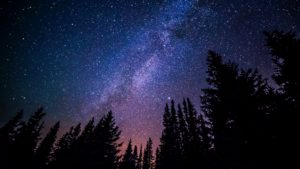 Photo by Ryan Hutton on Unsplash

At last, I slept in the shadow of snow-covered peaks in a small mountain town without pavement and street lamps and sirens. When I laid awake at night, I heard the cry of the vixen, the rushing wind, the owls calling to one another, the sound of the bear eating apples from the tree outside my window, or the raccoons cavorting in the tops of the pear trees like furry pirates.

I did not have it all. I had another piece of what I’m made of. I chose it, and I paid for it. I’m still paying for it, twenty years and thousands of miles later, and whatever the cost, it’s worth it. I cannot live in the city.

By the time my life is over, will I know everything I’m made of? Will I have lived with enough courage to choose what I’m made of, come what may? Will living true to what I’m made of sustain me? Will I ever find my own sealskin wedged between rocks, or locked away in a chest, or hidden in the thatch?

The selchie lives in a small cottage on the shingle beside the sea. She lives with a fisherman whose face is carved with a lifetime of loneliness that she has relieved. She and her children gather seaweed and driftwood, mend nets and dry fish and watch for the fisherman’s return, lighting a lamp and setting it in the window to welcome him home in the evenings. She lies with her man at night and listens to him sleep, and the waves come in, and the wind sighs through the beach grass, and she thinks of her sea kin and wonders how it is with them and if she’ll ever see them again. 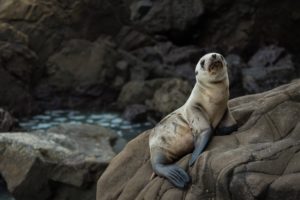 Photo by Kace Rodriguez on Unsplash

The selchie takes the folded sealskin from her child and holds it to her breast, weeping, smelling its fading perfume of fish and sea, rubbing its softness against her cheek. She tells her children she loves them, but she must leave, and they clutch at her hands and her skirts, crying, not understanding what is happening. She tells them they will see her again, but in a different form. She cannot stop to explain, lest the fisherman return and her chance for freedom is lost. She stumbles out of the house, casting aside her clothing as she goes, until she stands naked in the surf and steps into the skin. The children follow, stricken and wailing, pleading with her not to leave, but her need for what she is made of is even greater than her love for them, and the surf takes her gladly in its embrace and carries her out. She looks back one more time, her great, dark eyes full of tears, before she dives into the arms of what she is made of and disappears. 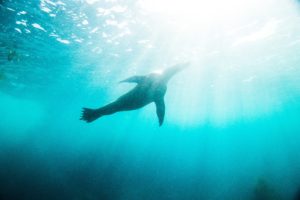